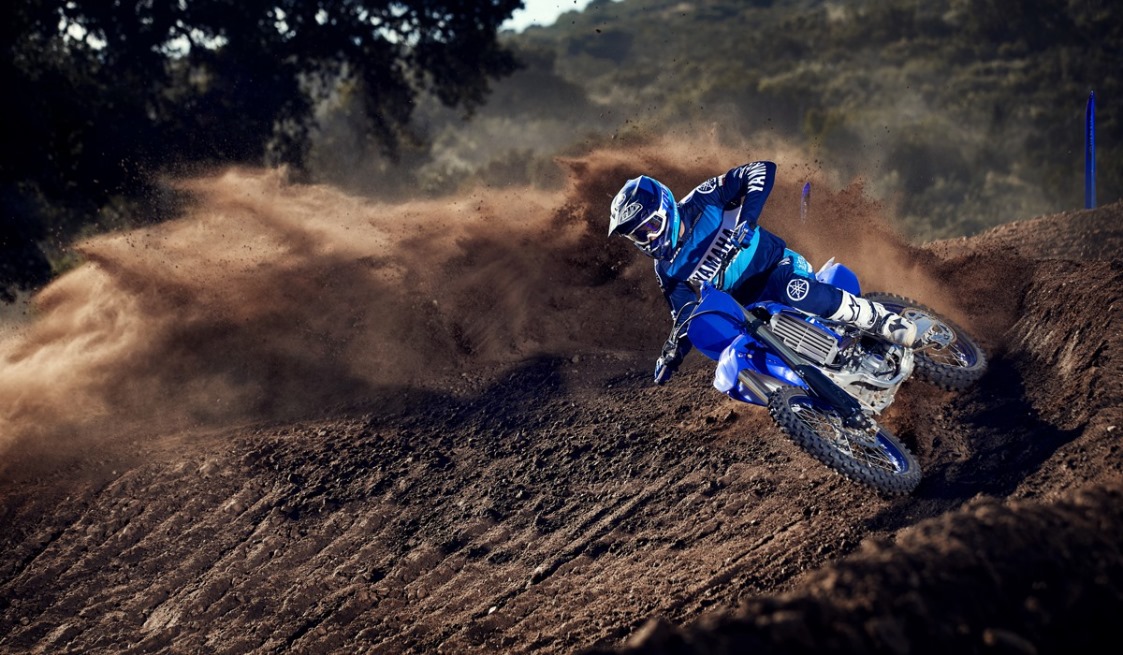 New YZ250F aiming for the podium

In the company's 65th anniversary year the commitment to winning is as strong as it ever has been, with Yamaha riders powering to remarkable results across the world. 2020 got off to an outstanding start, with Monster Energy Star Yamaha Racing rider Dylan Ferrandis defending his crown and scoringa back-to-back 250SX West Coast Championship title on his YZ250F a cross the Atlantic. And Monster Energy Yamaha Factory MX2 rider Jago Geerts winning his first Grand Prix at the opening round of the FIM MX2 World Championship series.

The philosophy that racing should play a key role in the company's operations started back in July 1955 when Yamaha Motor Co., Ltd was founded. Yamaha won its first race first time out, and on this day the company's future direction was chosen. And still today, at every level within Yamaha, racing is deeply embedded within the company's DNA – and the 2021 motocross range demonstrates that Yamaha continues to do whatever it takes to give every competitor the very real opportunity to fulfil their genuine potential.

With the strong range of high-performance 4-stroke and 2-stroke race bikes – as well as some of the world's favourite kids' dirt bikes – Yamaha is ready to welcome everybody to the victorYZone.

The YZ250F has already made a big name for itself as one of the most competitive 250 4-strokes out there. At every level this outstanding motocross bike has proved that it has what it takes to win in all conditions, in MX and SX. For the 2021 model year Yamaha is aiming even higher with the launch of the new YZ250F – equipped with thoroughly refined engine, revised frame, new suspension settings, new brakes and advanced digital technologies in this ultra-competitive class.

Every major component has been redesigned and improved in order to give Yamaha riders a genuine advantage on the racetrack. With its industry-leading reverse cylinder head design that delivers enhanced intake efficiency and improved mass centralisation, the 250cc 4-valve powerplant is already in a class of its own.

For the 2021 model year Yamaha's engineers have analysed each and every key component and made a large number of significant changes that are designed to give a wider band of stronger and smoother race-winning performance – as well as an enhanced transmission for slicker shifting.

The 2021 engine's power feeling from the mid rpm range through to over-rev performance has been refined and improved by the use of a new exhaust camshaft with a revised profile that reduces valve overlap. Together with optimised fuel injection settings, this new camshaft improves the YZ250F's engine character above mid rpm, giving a higher level of performance together with greater controllability.

The YZ250F's front-facing inlet is a key feature that gives this lightweight 4-stroke a very real advantage. As well as ensuring the delivery of cool and fresh air directly into the engine for increased combustion efficiency and instant throttle response, it also facilitates the use of a unique rearwards-inclined cylinder that achieves excellent mass centralisation which contributes towards the bike's easy agility and lightweight handling.

The intake system on the 2021 model is all new, and the redesigned airbox does away with the intake funnel and has been shortened by 20mm to give a smoother and more direct route for the incoming air. Another key change is the use of a new air cleaner box cover mounted at the front of the seat. Featuring new ducts, the 2021 cover increases the volume of intake air to deliver even stronger performance at high rpm.

To complement the increased high rpm performance of the 2021 engine, a new muffler with an increased capacity is fitted. Just 70mm longer than the previous design, the new system is constructed to give smoother acceleration especially at high rpm, and delivers a deep and subdued exhaust note that emphasises the torque-rich nature of this 250cc 4-stroke engine.

To complement the new engine's increased performance the clutch housing has been redesigned. The clutch basket features thicker walls that are significantly stronger, giving increased durability and consistently strong performance throughout the race.

3rd, 4th and 5th gears on both the input and output shafts have been redesigned to give improved transmission performance, and selected gears are shot peened to give greater strength to match theincreased engine performance.

The YZ250F is already renowned for its super-agile and lightweight handling – and ongoing evaluation and testing have enabled Yamaha's designers to refine the frame structure and take chassis performance to the next level.

The 2021 YZ250F is equipped with a new aluminium bilateral beam frame that – while outwardly similar to the previous design – features a number of significant changes that match the increased performance of the 2021 engine and make a tangible improvement to handling feel and performance. By fine-tuning the frame's rigidity levels at key locations, Yamaha's designers have been able to create a chassis that achieves lightweight handling together with a precise and confident feel. Other chassis components such as the top triple clamp, handlebar mounts, and front axle were also redesigned to complement the new frame – all contributing to the 2021 model's increased competitiveness.

Yamaha's motocross models are widely regarded as having one of the best suspension packages in the industry. At the front end the KYB® inverted coil spring-type forks feature speed sensitive damping to give outstanding handling performance, while at the rear end the KYB® shock and link-type Monocross system work together to deliver optimum control together with high levels of rear wheel traction.

To ensure it maintains its position as one of the very best motocross suspension systems 'straight from the factory', the 2021 package is further refined. The settings on the KYB® front forks are revised to give more progressive damping throughout the entire stroke, and this gives the rider a stronger feeling of contact with the track surface while also delivering better bump absorption that helps conserve rider energy. At the rear the KYB® shock runs with revised settings that give a more stable ride with a reduced tendency to pitch.

These important suspension improvements – combined with the refined rigidity balance of the bilateral beam frame – elevate the 2021 YZ250F's handling qualities to an even higher level. As well as being lighter handling, the new model gives a more precise feeling that enables the rider to hold their chosen line for faster cornering. Front wheel and rear wheel traction is also improved by these chassis changes, giving greater levels of machine control for a real advantage over the opposition.

Braking performance is increased and braking system weight is reduced for 2021. The redesigned front caliper is 30% more rigid than previously and uses larger diameter pistons and newly designed brake pads – while a new 270mm front disc achieves a 16% increase in pad contact surface area without any increase in weight. The rear brake caliper design is also new, and together with a new 240mm rear disc this system maintains the same level of braking power while weighing 120g less.

In order to achieve the optimal riding position for enhanced controllability, the handlebars on the 2021 YZ250F are mounted further forward, enabling the rider to load the front end and shift their bodyweight over the front wheel as and when required.

New handlebar clamps are mounted to a new lighter top triple clamp, and both units feature a revised rigidity balance for reduced stress on the rider's arms. The new chromoly steel footrests are also lighter, as is the new front axle shaft, enabling the Yamaha YZ250F to weigh in at just 106kg with a full 6.2 litre fuel tank and 0.95 litres of engine oil – just 3kg more than the YZ250 2-stroke.

Yamaha Racing has made blue its very own, and for an even sharper and more dynamic look the 2021 YZ250F is equipped with new Icon Blue bodywork featuring colour coordinated front and side number plates. Also equipped with blue rims, cylinder head and other engine details, the 2021 model presents a more forceful and sleek appearance that is unmistakeably Yamaha DNA.

The industry-leading Power Tuner is an easy to use digital technology that enables YZ250F – as well asYZ450F – riders to fine-tune the bike's engine power character at the trackside using their smartphone. Riders and mechanics can simply download the free Power Tuner App for IOS or Android devices, and then instantly connect with the YZ250F to make adjustments to fuel injection and ignition timing via the bike's CCU. In the Power Tuner app riders can create their own settings, and using the handlebar mounted button they can switch between two of the maps.

Besides being able to make changes to the engine's performance, the Power Tuner can also be used to record race log information and monitor a range of data, including system diagnostics, run time and maintenance – as well as comparing and sharing race logs and settings with fellow riders.